For all you in-person graphers, here's a familiar situation. You get the information, you put in the time, you are at the right place and finally here comes the person that you are after. They are actually willing to sign for you and the others waiting. You get out your items, and then you are happy that they are signing.

However, when they are done and you examine what they've signed, you find that it's literally a scribble. There is nothing identifiable about the graph that they gave you.

This has happened to me a few times. The first one is Jack Irons from Pearl Jam and The Chili Peppers. Jack was nice enough to sign for the few fans that were waiting for him before he opened for the Chili Peppers a few years ago. When I looked at the drum head he "signed" it literally was an "n" that extended down. But I guess that's how he signs because the other guy got the exact same thing. Probably the worst graph I've ever gotten.

The other one happened recently. I couldn't wait after the Simple Minds show to get Jim Kerr to sign my Live Aid poster, so I had a buddy try to get it signed for me. Jim Kerr and the original guitarist came over and signed for fans after the show. My buddy got one of his items signed and it came out ok. The he pulled out my poster and Jim literally put a scribble on it. Not one letter that could be made out. You may think he did that because he tried for two items. Not the case because apparently he signed 5 or six for one fan right before my buddy tried for a second one.

So my question is, who are some celebs that have horrible graphs. I don't mean people who don't sign, I'm talking people who sign, but when you look at it you think, is that it?

Yes, that's Jim Kerr's graph right above the JFK on my Live Aid poster, What is that? 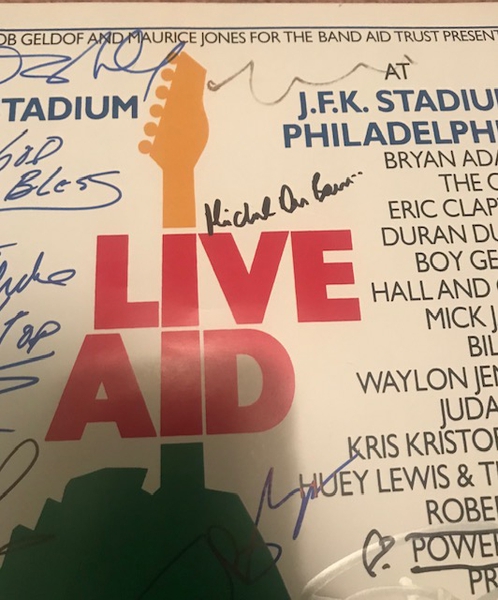