When musicians give you something, just for being nice

Going out and graphing in-person can sometimes be a challenge and yet it also can be very fun. You run in to all sorts of people. Most are usually cool, however some can be down right rude. (I'm talking fellow graphers.) I try to stay on the friendly side, and so far, things have worked out pretty good for me.

This past summer, my friend and I happened to run across a bus that was parked outside of a hotel. We weren't sure if it was Foreigner or Whitesnake, so we decided to go into the bar and see what we could find. Ends up, a couple of guys from Foreigner were there having some dinner and drinks. My buddy and I don't ask for anything, we just keep bs-ing with them and having fun. In all, it ends up being Kelly Hanson, two other guys and the tour manager. I tell the bartender that the next round was on me. Bruce, the guitarist, comes over and thanked me and asked if we were going to the show. Long story short, they give us two great seats to the show and meet and greet passes so we could get a picture with the entire band (including Mick Jones.) Very nice of those guys!! Best $40 I ever spent.

Just the other day, another friend of mine said he was going to try to see if Joan Baez would sign before the show. He sees a thin, grey haired lady with a piece of bread feeding the birds behind the venue. Turns out it was Joan Baez so he asked if she would sign his two albums and she graciously did. They got to talking, and he said that he wanted to go to the show but the tickets on the secondary market were between $200 and $300. She told him not to worry and asked for his name and said that two tickets would be waiting for him at Will Call. He asked me to go, and when we got the tickets, she also included after show meet and greet passes! What a gracious and kind lady. It was a great show and afterwards, we took pictures and she signed two items for me. We were the only regulars back there besides family members from her backing band and a grade school friend of hers who drove down from Buffalo.

The question is, have you gotten anything cool from musicians like tickets to a show or meet and greet passes ?? I believe that good things happen to good people. So be friendly- you never know what you might get out of it! 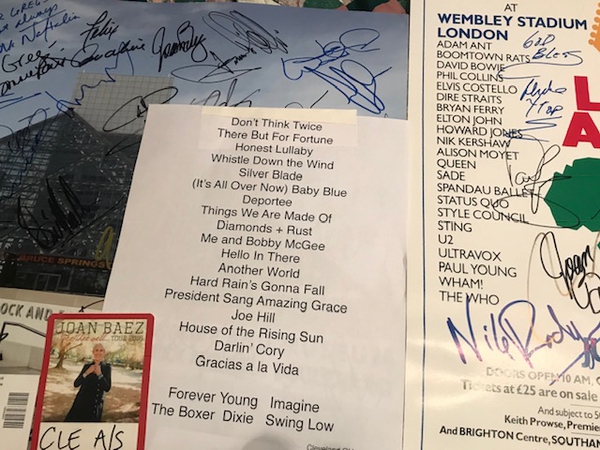 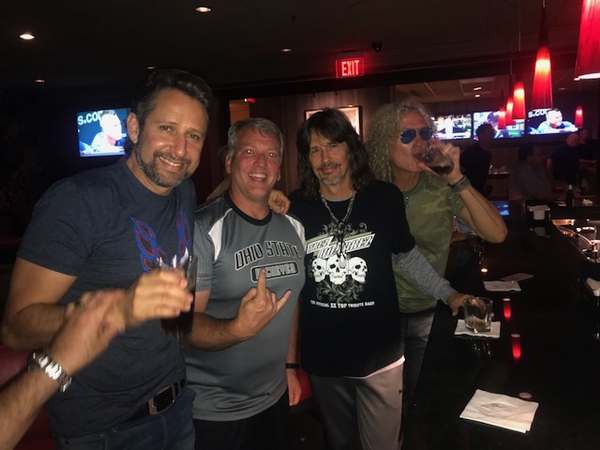